The Maine of my childhood was a “Once a Summer Jaunt” to Ogunquit with my family. It is a beach community on the cold north Atlantic. I can remember my father toting a shovel and digging four-foot holes in the sand to bury me or my brothers up to our necks in the gravel-like sand. That’s about the extent of my memories. My parents met on a sailboat in Maine. The rest was unknown until recently.

I’ve been to Maine twice in the last month or so as my boyfriend, Roy, has been hiking the Appalachian Trail. At this point he is heading southbound from Mount Katahdin. I dropped him off in Millinocket in July and met up with him again in Rangeley. After two trips to Maine, I figured if you aren’t a Mainer, or even if you are, you might want to know some of the things I noticed.

Things I noticed in Maine:

It’s true I never saw a live porcupine during my travels but I saw several roadkill. Porcupines have always seemed more like an imaginary creature, similar to a unicorn or a “pesky squirrel” in the movie Bambi. In researching porcupines, I now know that North America has the New World variety, which can live their entire lives in trees. Since they are nocturnal as well, it makes sense that I never saw a living one in my travels. They are apparently vegetarians and eat the bark of trees. Maine is loaded with trees and its nick name is the Pine Tree state. I never knew that Maine was a great habitat for porcupines but apparently it is. 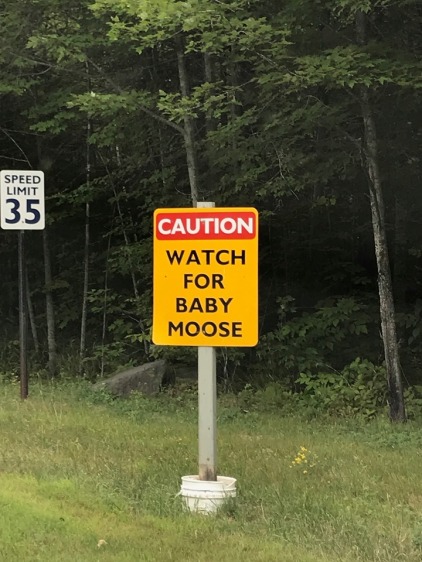 They wouldn’t put a sign up unless it was possible. I didn’t see a moose, let alone a baby moose but what fun to imagine I would. Roy ended up seeing an adult moose on the trail although it moved on quickly which is exciting. I guess I’ll live vicariously through him.

Outside of going to school in Ithaca, New York, which is known for its “Lake Effect” snow, I have never lived in an area that has to make provisions for snowmobiles. In Millinocket and, later, Rangeley, all had signs for snowmobile crossings, snowmobile repair and snowmobile parking. It feels almost like the wild west with its alternative modes of transportation of horses with stables and posts for tying the reigns. I can’t imagine owning a snowmobile and using it as transportation. It’s really hard to imagine it in 85-degree heat and most buildings not having central air conditioning. I imagine how these remote forests turn into a wonderland of snow-covered paths and the snowmobile being an essential form of transportation. It’s a great alternative to snowshoes.

As Roy and I drove through the backroads of Maine (and anything west of I-95 is a backroad), we started noticing the crazy-looking mailboxes along the side of the road. Many mailboxes were hung from a long metal arm with sometimes several feet of chain link. They were suspended far above the road. There were many mailboxes that were surrounded on all sides with reflectors. Of course, I had to look into the “swinging mailbox” thing and figure out what was up. Apparently, in Maine, you are responsible for your own mailbox and if a snow plow happens to hit your mailbox, you need to replace it. If there is no mailbox to deliver your mail to? You have to hike in or snowmobile (see above) to the post office because the post office won’t deliver your mail without a mailbox. Quite the catch 22. So, there are all kinds of mailboxes that are suspended 44 inches above the road to avoid menacing but crucial snow plows. I think this is fascinating how the local folks have adapted to their surroundings.

When Roy and I first drove along I-95 up to Bangor and then on to the far northern reaches of Maine (Millinocket is north of Montreal), we started seeing signage for “Caution: High Hit Area” with a picture of a deer on it. The signs are red and orange and catch your attention. After reading up on it, these signs are displayed temporarily during the Spring and Summer months as deer head out of the forest looking for fresh green grass along the road side.

The sign would frequently say how long the hit area extended, sometimes up to 17 miles. So as I was driving, I was hyper-vigilant looking for deer and I would start to lose track at how long it had been since I saw the sign. Pretty soon, I was always hyper-vigilant, especially at dusk. In retrospect, I never saw a single deer or moose or elk while in Maine, but I have seen deer in my own neighborhood in North Carolina.

This is probably a New England thing. This whole post is probably a New England thing. Whoopie pies are at almost every grocery store and restaurant. They are enormous. Roy and I ended up buying one on a lark to see what the Whoopie Pie thing was all about. The Whoopie Pie was the size of a Whopper. We ended up splitting it between the two of us and I’m pretty sure I wanted to unhinge my jaw while trying to take a bite. It was delicious. Moist chocolate cake with a peanut butter-flavored cream filling in between. Their origins are with the Pennsylvania Dutch, so I’m not sure why it’s so big in Maine, but if you want to try a Whoopie Pie, you can definitely find them in Maine.

As we drove around Maine, I kept thinking, I could totally live here with all this pristine wilderness and remote uninhabited lakes. This is off the grid. Most businesses are in old barns or farmhouses. There is nary a modern building in Western Maine. Finding a McDonalds or Walmart can be an hour’s drive away. It is remote with thousands of miles of forest, rugged mountains and barren lake banks. It’s mostly untouched by man. I have to believe that the winters are miserable and harsh for this place to be so untouched. Perhaps I will come back in the winter to find out.