My Rotary Club toured a local elementary Charter School a few weeks ago and there was a wall near the music room that had the question, “Why do you need music?” There were about 100 or so responses that had each child’s name, grade and individual response. It was really interesting but one particular response jumped out to me. Gavin in Grade 3 said, “It makes your mind explode”. Quite profound for an 8 year old. Explode is a powerful word and it resonates for me. It’s kind of like the old tag line for Coke: “Things go better with Coke”. Things go better with music; life goes better with music. 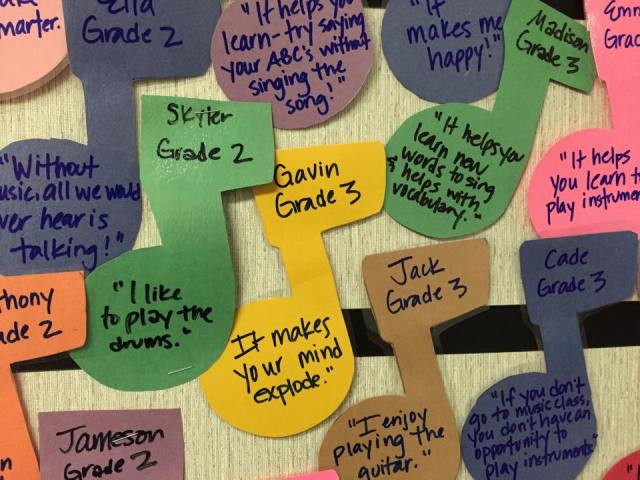 For me different songs take me to a particular moment in time in my life. Songs in the Key of Life by Stevie Wonder transports me to the front porch 210 College Avenue in Ithaca, NY. My friend Mark and I sitting on a sofa on that porch watching folks walk by during the spring of my sophomore year. Who let the dogs out reminds me of my son at age 5 dancing to the music in the middle of Windsor Water Works transfixed by the beat. Mac the Knife with Bobby Darin is definitely my Junior year of college and my co-workers from Noyes Lodge making shark bites with our hands. I hear that song and I am there. As I was hitting the last .1 mile of my half marathon and Katy Perry’s Firework came on my iPod to carry me through. Transported totally.

Well there are a lot of scientific reasons why music is so good for you and here they are:
1. Brain Function. Music activates cross function between the left and right brain. According to the Journal of the Royal Society of Medicine, “Rhythm and pitch discrimination are processed mainly in the left hemisphere whereas timbre and melody are found chiefly in the right…. listening to music would prime the activation of those areas of the brain which are concerned with spatial reasoning.” So if you want your left and right brains to connect, listen to some Mozart.

2. Better Grades. Another quote from that music room wall was “It helps you learn – try saying your ABC’s without singing the song”. I have to admit, when I used to have to actually file in a file cabinet (so old school), I used to sing the abc’s especially around l,m,n,o,p. But the American Music Conference has cited research that shows studying and creating music may help improve your capacity to learn other subjects and get better grades overall. Nothing wrong with that. Even to learn another language.

3. Universal. In an article by askmen.com, “Ask any American backpacker what subject comes up when they are at a conversation standstill with an Argentinean that doesn’t speak English – invariably Led Zepplin, Metallica, Eric Clapton, the Rolling Stones and Pearl Jam will be discussed.” I remember my tour of Colombia in my middle twenties. Everyone asked about Madonna and Michael Jackson. Everyone. It is the universal language.

4. Exercise. I never would have survived training for a marathon without my iPhone and my trusty ear buds. When you are running 15 miles for some 3 plus hours, the greatest motivation is the beat beat beat. According to Active.com, “Research suggests that music really can boost athletic performance. Liverpool John Moores University in England looked at the effects of music of different tempos on stationary cycling performance. The subjects’ average power output over the full 25 minutes was found to be 3.5 percent greater when the music tempo was increased. Their power dropped by 9.8 percent when the music was slowed down.” Music powers exercise.

5. Pain relief. According to the Journal of Advanced Nursing, music can reduce chronic pain by up to 21%. “The results from a clinical trial revealed that people who listened to music for an hour each day for a week had improved physical and psychological symptoms compared to those who were deprived of music.” Listening to music might just be the best medicine.

6. Emotional benefits. As I am writing this, I have iTunes playing my “Create” music list which has nothing but instrumental songs on it. Anything from classical to Zoe Keating to Ottmar Liebert. Well any time I hear Ottmar Leibert and his spanish classical guitar it transports me back to being 8 months pregnant with my daughter in Albuquerque, NM. I used to turn on Ottmar when I was cleaning the house or reading. I was pretty sure that Natalie would come out with a Classical Guitar in hand after all those hours of listening to Ottmar. It was relaxing and calming. I remember in the actual delivery room, we had tapes of Ottmar playing. I’m not saying it was easy but it was soothing.

This has really opened up a can of worms of memories for me. One more I have to mention is my dad playing Simon and Garfunkel and Joan Baez LP’s when I was a kid on the HUGE hifi in the living room of our house in Wilmington DE. “Parsley, Sage, Rosemary and Thyme”. Music becomes ‘that bridge’ between so many different things in life. It’s really amazing when you think of it. Music has even been found to help prison inmates relax and be less aggressive. It can be life changing for all of us. What song is a big memory for you?