Over the last few months there have been several events accompanied by insights that bubbled up into an enormous realization; I avoid conflict. I think a lot of us avoid conflict but I realized this had become an almost daily occurrence. The illusion has been that if I avoid something uncomfortable like telling my son “No”, he will remain happy and the conflict will go away. In reality, it just builds. It may not appear today but that conflict will be back or the effects of not saying “No” will have a long term impact. The worst case scenario is that a relationship whether at work or personally, can be irreparably harmed.

I recently facilitated a fantastic new training model called “5 Behaviors of a Cohesive Team” based on a book by Patrick Lencioni. The first behavior is vulnerability based trust, (i.e. can I admit mistakes, can I ask for help, showing weakness, etc.) and the second behavior is constructive conflict. Patrick describes conflict:

“Therefore, it is key that leaders demonstrate restraint when their people engage in conflict, and allow resolution to occur naturally, as messy as it can sometimes be. This can be a challenge because many leaders feel that they are somehow failing in their jobs by losing control of their teams during conflict.”

Just replace the word parent, partner or friend into that quote for “leader” and child, spouse or coworker for “team”. I realized that I felt like conflict was failing whether it was with my husband, my mother, my assistant or my son. It turns out that stepping into conflict is critical and necessary for all teams, relationships and marriages. Wow. So my avoiding the conflict or not letting the conflict occur between folks at work and at home was actually destructive. That’s a big, “Aha!” 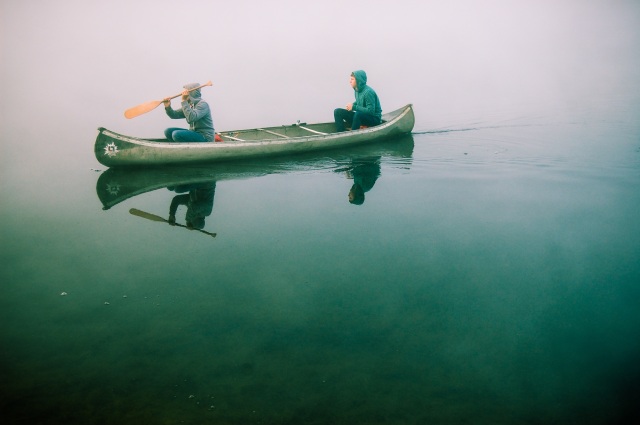 So here are some of the things I’ve been working on in order to step into conflict:

1. Uncomfortable. I’ve been trying to embrace being uncomfortable. I’m the kind of person who goes around smoothing the waters. Human Resource folks do this all the time. Talk to Marketing, talk to Accounting, talk to Production and make it all right. Make sure everyone is happy. This is an illusion. It’s just pacifying everyone and no solution is ever figured out. In recent weeks I’ve tried to pick at the scab and to be uncomfortable. I need to rock the boat. I bring up the financial shortfall or the difference in opinion or talk about the lapse in communication. Step into being uncomfortable.

2. Discord. I’m trying to be accepting of discord. My idea or interpretation is not the only one that matters. I know that sounds obvious but we all have our own world view. I need to allow for a difference of opinion and let it go. It’s easy to get attached to a difference of opinion as if the other person doesn’t respect me or my ideas. Staying detached from the difference and not making up assumptions for the discord is critical. I realized this when I look at my parent’s marriage. My father is a devout conservative Republican and my mother is a bleeding heart Liberal. They will celebrate 60 years of marriage in 2015. That amounts to a lot of discord. From Carter to Bush, there was a lot of passionate debate but they were able to agree to disagree. Accept discord.

3. Ask. Be open to ask for help. As Tal Ben-Shahar espouses in his book, The Pursuit of Perfect, reaching out and being vulnerable enough to ask for help can strengthen your relationship with your team, your family and your boss. The perfectionist in all of us defaults to giving advice instead of asking for it ourselves. Think about it for a minute. When someone asks you for help, aren’t you honored? Doesn’t it strengthen your relationship? There is the fabled story that Ben Franklin asked to borrow a prized book from an arch rival. The arch rival lent it to him. From that point forward he was an ally. How can you keep an enemy of someone you lent a prized book to? It takes vulnerability to ask for help.

4. Empathy. Put on someone else’s shoes to understand where they are coming from. I’ve learned some very powerful tools from my training with CRR Global. One of them is about looking at someone else’s position from the perspective of them living in a different land. I did this recently with a group regarding the utilization of the company cafeteria. We divided the group into three “lands”, one group ate in the cafeteria on a regular basis, the other rarely or never ate in the cafeteria and the last group were the workers in the cafeteria. They each stood in their land and told us what is was like in the land. Then they each visited the other lands to find out what it was like to be from a different perspective. It was completely enlightening. To hear a coworker say that “it must be difficult to try and serve food when the employees are limited on time” or “I just want to escape from work so I go off premise”. Every point was valid and hearing it expressed built empathy for all the participants. Empathy is key.

5. Act. Do something. Sitting back and criticizing behind someone’s back is the coward’s way out. Take a deep breath, face your fears and take a step forward. If you don’t like the new policy, the bonus plan or the joke your co-worker just told; step up and speak up. This is definitely the hardest part for me. Based on several books and articles I have read this probably because women are more comfortable advocating for others than themselves. I’ve done this in baby steps. If I wait until I’m not emotionally charged and speak privately to the offender by saying something like, “You may not realize this but I was offended by what you said”, or “In my opinion this project looks tenuous based on the feedback I’m getting from our clients”; I am capable of acting to affect change Act and be heard.

Facing conflict instead of hiding from it is scary, messy and imperfect. It means that you can’t play it small. Rock the boat before it tips over! In the long run, your relationships and your team will be strengthened by it.